The pastel and dark blues, beige and a solid primary red were once seen on Shepard Fairey’s 2008 “Hope” poster, which advocated for President Barack Obama in a presidential race where candidates collectively broke records by raising over $1 billion for the first time in U.S. history.

This poster was also designed by Fairey, with the same colors and style — but with a more cynical message. It advertises "Pay 2 Play," a documentary that critiques and exposes a political system, using street art as one of many focuses, in which big money interests hold more sway. After initial success at the Angelika Pop-Up theater, showtimes for the documentary were extended until September 25.

“I think corruption is an abiding story,” director John Wellington Ennis said, referring to a common topic in many of his films. “It evokes back to childhood when you’re bullied or when someone takes something from you knowing that you can’t get it back.”

For Ennis, though, big money is just one way to gain influence.

Street art, he said, can be a powerful tool of political expression that can give a voice back to “grown ups” who are being wronged by the power money has in the political system.

“Street art struck me as an interesting parallel as sort of a last resort for people who have next to nothing to put out a message,” Ennis said. “It’s in a public space … and you don’t have to be in on something to appreciate it.” 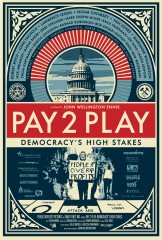 "Pay 2 Play" documents the journey of the filmmaker from 2005 on, when Ennis went to Ohio to tell the story of the Coingate scandal. His father had been auditing the scandal on behalf of the Bureau of Workers' Compensation, and when Ennis, a comedian at heart, heard about what was happening, he felt he couldn’t pass up the chance.

“The details of it were so funny and over the top,” Ennis said. “I felt like, if I could tell that story, then maybe people could see how these things come back to running for office.”

Over the next decade Ennis put together the film, which includes the “secret” story of the game Monopoly and interviews with Los Angeles street artists, to explain big money in political campaigns, especially in the years after the 2010 Citizens United Supreme Court decision.

“Eventually you see a whole bunch of different people and they’re saying the same thing,” Ennis said. “It’s fun to let the audience make those connections as they occur.”

Just like his idea of street art, he wanted the movie to be accessible to all sorts of people.

“You know, in the end it’s just going to be a funny movie that people will watch and have fun with,” he said. “There are so many people who come here to make a difference and I want this to be an inspiration to them.”

And, Fairey art isn’t the only thing Pay 2 Play has in common with big political campaigns.

Roll Call Election Map: Race Ratings for Every Seat Get breaking news alerts and more from Roll Call in your inbox or on your iPhone.