The Out of This World Legacy of Supernova Mikulski

GREENBELT, Md. — Sen. Barbara A. Mikulski spent Wednesday back on the campus where she watched as astronauts repair the Hubble Space Telescope more than two decades ago.

"I was here for that first mission," recalled the Maryland Democrat who will retire at the end of this term of  Congress. "I went on so many Rolaids that day, I knew that I would never have acid reflux for 20 years."

The truth is NASA wouldn't be the same without Mikulski and the steady stream support of she has delivered — and the people at the Goddard Space Flight Center know it. There were presents and cake for the Senate's very own supernova at Wednesday's visit to the facility in suburban Washington. (Astronomers based in Baltimore already named an exploding star for the senator).

Mikulski ran well past her allotted time during a town hall meeting with employees and community members in a packed auditorium on campus about a half hour north of Capitol Hill. It was crowded enough that officials were turning people away at the door. She discussed her successes in securing funding for NASA in the recent omnibus appropriations law, but was perhaps most emotional in looking back at the Hubble Space Telescope, which launched in April 1990.

"The big issue we thought was to get it up there, and to make sure we could operate it when we got up there. Little did we know that it when it went up we would have an 'oops' moment, a really big expensive 'oops' moment," Mikulski said. "But you know, it was a different kind of Congress then because we, while we looked at the rocket ships, there was a different ship. It was called bipartisanship."

The problem was that Hubble could not send back the brilliant images of the universe that had been promised, putting NASA itself at risk. Mikulski remembered being at Goddard in 1993, during a shuttle trip to repair the faulty telescope.

"It was a white-knuckle moment, because if we couldn't repair the Hubble, I knew we couldn't go into space to ... do the space station," Mikulski told the crowd. "So, that [was a] fabulous day when the Hubble was repaired and the pictures came back to Earth and I announced on the floor of the United States Senate, 'The trouble with Hubble is over.'"

The fix was announced in January 1994, and Mikulski spoke at the news conference as the then-leader of the subcommittee with jurisdiction over NASA spending. Promoting the space agencies interests, particularly in Maryland, has been a long-term priority for the retiring Democratic senator who has long served as chairwoman or vice chairwoman on the Commerce-Justice-Science subcommittee.

"I believe that Hubble is one of the greatest contributions that America has made to mankind," Mikulski said Wednesday. "Any rich nation can build a space telescope, but it is only a great nation that gives its information away to the world to be used for the common heritage and the common betterment of mankind, and that's why we will always be America the exceptional."

Since announcing her intent to retire at the end of her current term last March, Mikulski has remained in the trenches of appropriations. Plans by Senate Majority Leader Mitch McConnell, R-Ky., to advance the dozen regular spending bills in 2016 could keep her plenty busy through the summer, if the process of doesn't collapse first.

"Other people when they announce they're retiring might, you know, polish their buttons or look at the awards they got, and I said, "Hell no, we've got to be ready to go,'" Mikulski said, highlighting the importance of fully developing a manned space flight program to end the need to rely on Russian rockets to get Americans into space. 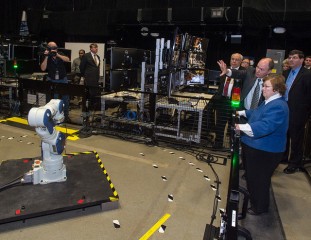 Ellen Gray, a science writer for Goddard, said that Mikulski's retirement news reverberated at the Greenbelt campus among the nearly 9,000 employees.

"I think there was definitely that reaction because she has been such a steady force, and force of nature in certain respects, with making sure that NASA's got stable funding, has a budget, is considered — and especially Goddard and Maryland — are considered when putting together plans for future missions," Gray said. "That's our work, and I think there's a little bit of uncertainty around what's going to happen next. A lot of gratitude for what she's done a lot of hope that the future senators will continue the precedent that she set for supporting Goddard and NASA overall."

Mikulski told the audience she learned much about the world beyond and the importance of exploration from two colleagues who had been to outer space: Democrat John Glenn of Ohio and Republican Jake Garn of Utah. Sen. Bill Nelson, D-Fla., the current ranking member on the authorizing committee with NASA jurisdiction and another astronaut, was not yet in the Senate.

Glenn was the first American to orbit planet Earth, but Garn's story was in some respect more remarkable on Capitol Hill. While serving as the top Republican overseeing NASA's budget, Garn served as a payload specialist on a weeklong shuttle mission.

The significant number of Maryland jobs connected to space exploration have undoubtedly contributed to Mikulski's interest, but hearing the emotional tone she struck Wednesday in the packed auditorium to multiple standing ovations, it was clear it's become much more for the senior appropriator.

"As we went out there to study the universe, it told us a lot about our planet," Mikulski said. "It also told us most of all about ourselves, because what I saw here at Goddard every single day when I visited, I saw people who dream, people who dare, people who discover, people who are willing to risk their careers on being able to pursue an idea for the good of science and the good of mankind."

NEW! Download the Roll Call app for the best coverage of people, politics and personalities of Capitol Hill.